The Best Herbs and Spices for Diabetes 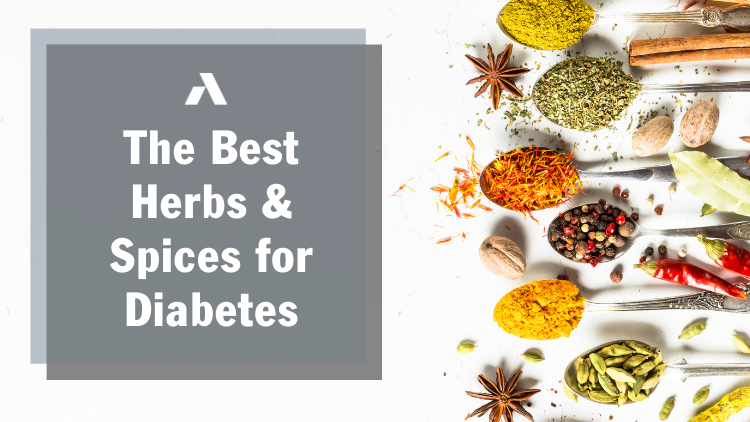 So you’ve undoubtedly heard the expression “variety is the spice of life”. Well, a more accurate statement may be “spice is the variety of life”. We obviously use spices to flavor our food, but what are so often forgotten, are the many health benefits that we rarely consider.

Here are 7 herbs and spices that will a.) make your food taste better and b.) give your body a healthy boost with every bite you take.

Turmeric is the king of all spices. Ounce for ounce, it's the most anti-inflammatory, antiviral, antibacterial, anticancer, and antifungal one of the bunch. Eat it as much as possible, period.

In Ayurveda and Traditional Chinese Medicine, it's used to treat everything from diabetes and allergies, to Alzheimer's and arthritis. Turmeric's active ingredient is curcumin, an antioxidant compound that reduces inflammation and also gives it its vibrant yellow color. Curcumin has actually been shown to reduce growth in cancer cells (another pretty good reason to eat it, I’d say). Turmeric also contains other anti-inflammatory compounds that inhibit swelling and pain, and block the plaques that cause Alzheimer's disease.

So the takeaway is? Eat more turmeric. Add it to salad dressings, meat and fish marinades, or even turmeric infused tea, latte, or lemonade. It's surprisingly tasty.

Cayenne's active ingredient is capsaicin, which delivers both a chile pepper's medicinal qualities and its spicy heat. The hotter a pepper, the more capsaicin it has. In addition to a long history of medicinal uses in India and China, Native American healers favored cayenne for digestive and circulatory problems. For all its good benefits though, there are some negative aspects of capsaicin. Like black pepper, cayenne is highly likely to have high amounts of mold toxins, so proper sourcing and storage is really key.

Sourced and stored properly, cayenne is a fantastic source of antioxidants that fight free radicals and protect against cell damage, which often manifests as premature aging. There are promising studies underway to observe whether cayenne inhibits cancer cell growth, but the science is still young. Ginger has long been used in Ayurveda and Traditional Chinese Medicine to combat inflammation and pain, soothe sore muscles, and treat aches and fatigue. It's also a common remedy for digestion as it fights an overgrowth of nasty gut bacteria. The compounds in ginger actually act in a similar way to anti-inflammatory drugs (e.g. – ibuprofen) that are used to treat arthritis. If more people knew this, more people might be able to find relief from ginger tea or Asian dishes.

Ginger is also great for sore throats, colds, and believe it or not, you can apply it directly to a painful joint with a compress for relief through skin contact. As with all spices and herbs, storage is important for ginger. Poorly stored ginger powder is at risk for mycotoxin contamination and fresh ginger can get moldy in the fridge.

If you decide to cook with ginger and you're using oil, add it at the end of cooking because, cooked with fat, it can get a bitter taste. Also, if you like ginger with your sushi, go for the yellow variety. The pink stuff you see in some restaurants has been colored with an artificial dye.

Cinnamon is most touted for its ability to lower blood sugar in people with diabetes. As with its spicy counterparts, cinnamon contains compounds with antioxidant and anti-inflammatory properties that reduce the likelihood of cellular damage and chronic disease. It's been shown to protect against heart disease by preventing blood platelets from clumping, and also has been shown to inhibit abnormal cell growth, making it a powerful anticancer option. Cloves are a rich source of antioxidants and help protect cells. They are also a powerful antifungal in the body, whether ingested or applied topically. Beware, though, clove oil is potent stuff. It's so strong it can be toxic if overused. I recommend using whole cloves whenever possible.

You won't be surprised to learn that sage, too, has anti-inflammatory molecules, which contribute to its flavor and aroma. Sage is specifically thought to protect against inflammation-based neurological conditions (e.g. - Alzheimer's), and shows promise for improving memory and concentration at the same time. Its compounds also have antioxidant and anticancer effects. Packed with camphor, its extracts can be used to kill bacteria and fungi, so it's a powerful spice when eaten, or used in a natural kitchen cleaning solution.

Like sage, rosemary contains antioxidant and anti-inflammatory compounds. It increases the activity of an enzyme that removes free radicals associated with chronic inflammation. This is especially true when the herb is cooked, so add it liberally to vegetables, meats, and other savory cooked dishes. You can use it raw too, as the flavonoids in rosemary have been shown to inhibit the growth of pancreatic cancer cells and prevent hemorrhoids. Fun fact: If you're going to cook something in oil, add some rosemary and it will help prevent detrimental oxidation to the oil because rosemary acid is an antioxidant.